IRT is a big open source BI project, but often doesn’t get the same consideration as a Pentaho or Jaspersoft. Let’s take a closer look.

This project is build under the Eclipse Foundation, which also produces BugZilla, a fairly popular software QA and bug tracker tool. A lot of resources, though, are pushed in by Actuate, the commercial BI company. They first started the Eclipse project. Not surprisingly then, they are marketed as the top open source business intelligence tool. Actuate uses it as the core of its product offerings, with value add services, consulting and premium coding. For example, they offer BIRTonDemand, a cloud based SaaS business intelligence solution.

The project that is downloaded through the Eclipse site is available as an open source free solution and can be deployed as such. As with most open source solutions, it has its pros and cons. Obviously, the price and licensing is very good. However, support and integration is going to be more of a DIY deal. While the software will work with most databases, its geared toward open source data sources. The tutorial database, for example, is based in MySQL. If your organization already has these tools and expertise in place, it would make the learning curve easier. It also is built to integrate with Java and J2EE clients and applications. 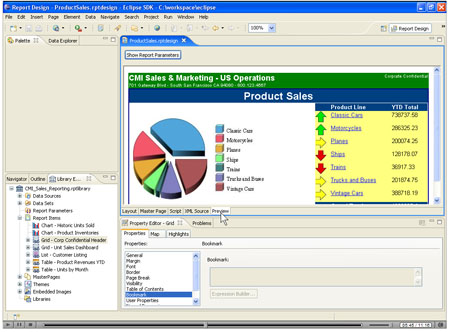 The report designer is a little bit technical for a lay person to work with. For example, to design a report, a user would need to create a query against a data source. Report objects such as metrics and attributes and dimensions aren’t built in a centralized metadata. Objects can’t be reused then in different reports. The reports are more of a visualization of the SQL select. The Report Viewer desktop client, while offering reports, charts and graphs, is a little rudimentary. There is little in the way of dashboards or other slick visualizations out of the box.

GO from BIRT to Home