Birst claims to be the leader in SaaS business intelligence. We’ll take a look at the company and the functionality they offer to see where they fit it.

Although they have historically pushed themselves as the premier provider of Cloud BI, the most recent release has seen some changes. For the first time, with version 5, companies had the option of running the systems on their data centers. There is also the option for deployment by a virtual appliance. The appliance is interesting in that its not hardware, but rather an add-on to a customers on premise installation.

They offer reports, dashboards, OLAP, and even mobile. Mobile, though, for the time being is limited to iPad only and is pretty basic especially compared to others such as RoamBI and Microstrategy. Here's a couple screenshots from that: 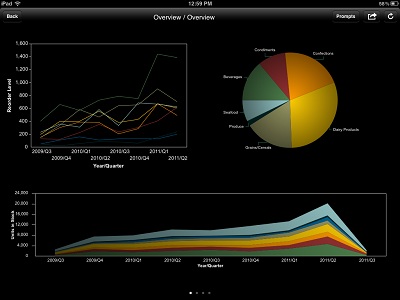 And this is more of a basic table: 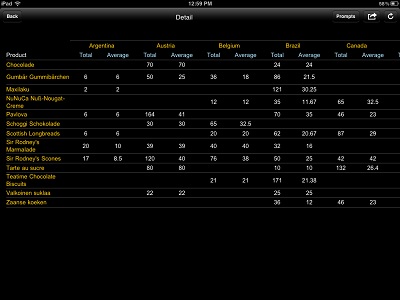 The main selling and marketing point for them has been the SaaS architecture. They were among the first analytics companies to have an end to end infrastructure for the process. They host databases, servers, software, and related technologies. Interestingly, they use a third party provider, Rackspace, to provide the hosting data centers. Other larger BI vendors are using some of their heft to have their own datacenters, Microstrategy being one example.

We've worked extensively with them since version 5.3.  One of the most interesting functionality is the hosted datawarehouse and ETL piece.  You can upload your basic data from numerous sources, and do the data modeling and work all within the application.  No other infrastructure is needed.  This is a nice feature for customers without an existing database or data warehouse resource.  While the DW features aren't as full fledged featured as a SSIS/SQL server for example.

Customers can have their data hosted entirely within the BI cloud environment, use data locally, or take a blended approach. Pricing isn’t directly available on the website, but they have a relatively newer model that puts cost on a concurrent user basis. Previously, they were using the industry standard user pricing. Pricing is also tied to the amount of data transferred by month, which can often be the case with hosted providers as that is a direct driver of costs.Despite their aims to target all types of customers, the customer list seems to be a little bit thin on Fortune 500 type entities. Some of the bigger names included Citrix and Rackspace themselves. They are a private company that is still in the fund-raising phase, although they have a decent sized warchest, $20 million so far.

Go from Birst to Home