Dundas is a dashboard based business intelligence company. They are one of the pioneers in the field, having been in business since 1992. They also run the popular dashboard site Dashboard Insight, although oddly enough, they promote other dashboard software companies as well.

The main strengths with this tool is its ability to integrate well with the Microsoft developer ecosystem. In fact, Microsoft uses their data visualization components in its SQL 2008 and above Report Designer packages. They can be used easily in .net applications, as well as with Sharepoint. They even can be used as the dashboard front end for Microsoft Reporting Services. It’s a browser based application built, not surprisingly, using .net and Silverlight. Microsoft shops will definitely like this one! Internal developers can also use C# or the internal DundasScript language to extend and customize the visualizations. A very common use is a replacement for the built in PerformancePoint dashboarding solution that works in with SharePoint. Being able to be uncoupled from SP and offering a more dynamic interface using Silverlight is very appealing for many MSFT shops. 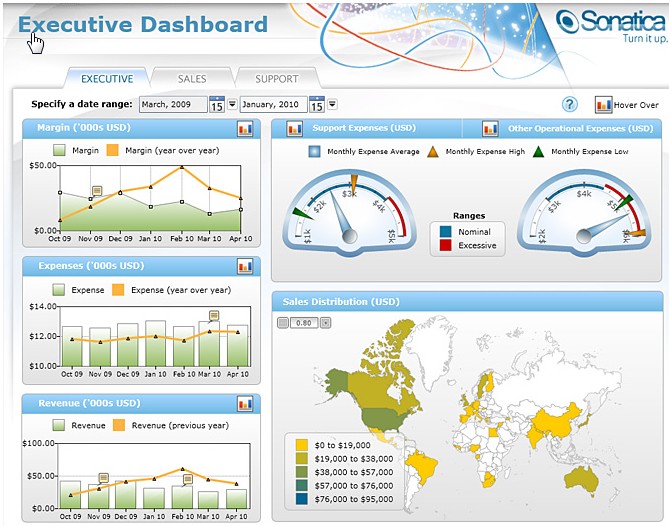 They have one of the deeper selections of visualizations, gauges, and widgets available, including some that are fairly unique, including the pyramid. The dashboards generally have smooth functionality. Another nice feature of the dashboards are the ability to save bookmarked versions, with settings saved. Several other companies have gotten this feature recently, as customers seem to like it, including Qlikview. Given the strong Microsoft connection, its no surprise that this system connects well with SQL, including Analysis Services. W

While these dashboards can integrate in with Microsoft data sources fairly easily, the rest of the supported data sources are a little thin. Oracle and MySQL are supported, but noticeably missing are DB2 and Vertica for example. This is definitely something to keep in mind on the data warehouse end.

Go to Home from Dundas