Tableau software is a fast growing visualization and dashboard tool that has been growing rapidly the last couple of years. They went public in the spring of 2013 and have been gaining customers quickly, with a rapid application.  We’ll take a closer look at what they have to offer in version 10.1, released 2016 Q4.

You may have seen some of their technology at work in a newspaper or interactive website, called Digital. CBS Sports and the Wall Street Journal have both used their tools to create visualizations.  Tableau is pushing to get data in the hands of analysts and business users, rather than be bogged down with IT infrastructure.

The totally free version is called Public, and can be downloaded from their website. It works as a good quick way to take a look at some of the visualization types. The data is publicly available so be careful with using sensitive information there. You also won’t be able to save to a local file for personal use. If you have a blog or website, its an easy way to add a quick visualization using Excel, csv, or other data without getting a full license. You can embed the HTML directly into your web code. The digital version allows security on the source data and a larger total data limit and is intended for larger scale commercial applications. 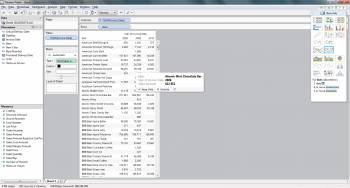 For a deeper investigation, a better bet is to download a trial version of the full-featured applications.

Personal Edition – Limited to Excel, Access, and text files and cannot upload to server or online, although it can publish to Public.

Professional Edition – Can connect to most common commercial and open source databases, in addition to spreadsheets and text files. Another recently added feature is Hadoop connectivity and online data source through the Azure Marketplace.

Online - A hosted version of server, allowing for a SaaS like entry into the market.

They also have a mobile offering, which covers iPad, iPhone and Android. They show some well designed visualizations.

Although they are often labeled as business intelligence, they lend themselves more toward dashboards,visualization, and data discovery. Key competitors would be closer to a Qlikview or Spotfire than Microstrategy or BOBJ. It is finding a niche along side some of the bigger players as a desktop charting tool, filling in some of the others.  However, they are increasingly pushing into enterprise accounts as a agile tool to provide quick insights to data.

Go from Tableau Software to Home